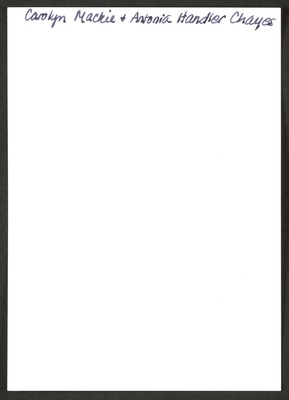 Photograph (back side) of Carolyn Mackie and Antonia Handler Chayes. Chayes, an educator, lawyer specializing in international politics, and former undersecretary of the Air Force, delivered the address "Beyond Negotiation: Alternative Dispute Resolution" as an Edith House Lecture at the University of Georgia School of Law on April 12, 1987. Carolyn Mackie was then the managing editor of the Georgia Journal of International and Comparative Law. Established in 1983, the Edith House Lecture Series brings outstanding female legal scholars and practitioners to the University of Georgia. Transcribed from photo: "Carolyn Mackie + Antonia Handler Chayes."