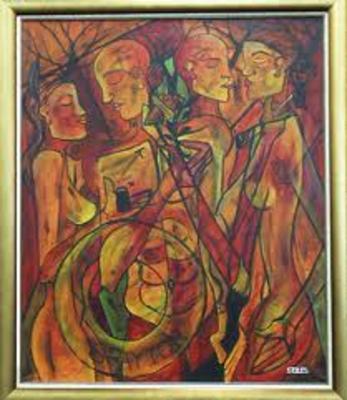 Significance: This work is unique in that it reflects and draws upon relevant case law, theories, ideas, and history examined in the 1st semester of law school here at the University of Georgia. Considering that our legal education here is premised on case study and in acknowledging and honoring the significance of Justice Holmes' Lowell lectures I felt it only appropriate to title this work The Common Law. The following dialogue explains this work, the the artist's perspective, and gives some light to the various elements incorporated into this piece.

Property: The feather in the hair of the woman (left) represents Johnson v. M'Intosh and the concepts of right to title and right to occupancy. In the central character's left hand he bears a fox and a time piece on his wrist. Those elements are reflective of Pierson v. Post, the rule of capture, and the concept of first in time. In the central character's other hand he holds a twig, which draws upon the ceremonial practices of feudal England in the passing of seisin from one party to another.

Civil Procedure: The man in the background in the legendary Rex Grossman, who is serving process in the most effective method, in person. The elongated arms of the woman being served are symbolic of the long-arm statutes provided in state laws.

Contracts: The woman (left) is presenting a salt shaker in her right hand, symbolizing Droughty v. Salt and the concept of the donative gift promise. The lines running between the two characters in the background are symbolic of the formation of a contract in the meeting of the minds.

Torts: The purple tulip is pulled from the Old English case of Byrd v. Holbrook and symbolizes the spring gun used to protect the defendant's garden. Here it is being used against the central character and raises the concern of doing with an instrument of device that which one is not permitted to do in person. The holding of hands also represents Summers v. Tice and the concept of joint tortfeasors. The life preserver bearing the name Grayton symbolizes the Grimstad case and the irony embodied in the court's but-for test. The four (4) dots on the eye of the woman (right) represent foresight, and the eye in her bun of hair represents hindsight. This relates to Eckert v. Long Island R.R. and Terry's flawed theory on negligence in using hindsight to determine foresight. The cracker in the jaw of the woman (left) draws upon the legend at common law that the kind had the Chancellor of the Writs pass out crackers to those complaining about the insufficient writs of trespass in order to quiet the crowd, thus the Ritz cracker.

General Elements: The X's on the central character are reflective of the battle wounds first in the stomach, then the chest, and then in the neck sustained by Justice Holmes in his service to our country. The large hand of the central character bears on each finger "learn", which is a tribute to Justice Learned Hand. The trees in the background are the same trees visible through the large pane glass of the Law Library, constant companions of those who spend long days devoted to their studies.