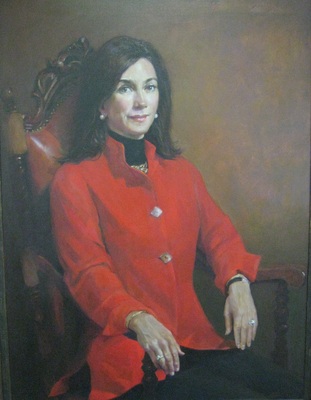 Kathelen Van Blarcum Amos graduated in the J.D. class of 1982 of the University of Georgia School of Law.

Amos has been a member of the University of Georgia School of Law Board of Visitors since, serving as chair many years in a row. In addition to her support of the law school’s renovation, significant gifts made by Amos include the establishment of the Kathelen Van Blarcum Amos Law School Scholarship in 2010. A native of Columbus, Ga., Amos joined Aflac as a staff attorney in its legal department in 1985 and was promoted to deputy counsel seven years later. In addition to duties in the legal arena, she was made responsible for the company’s public and media relations, corporate philanthropy and its shareholder services department. Then, in 1995, her role was further expanded to include corporate advertising. Notably, she was also Aflac’s first female executive vice president, receiving that promotion in 2001. Two of Amos’ most visible contributions during her career at Aflac were the introduction of the very successful Aflac Duck advertising campaign and the company becoming the named sponsor of the Aflac Cancer Center and Blood Disorders Service at Children’s Healthcare of Atlanta. Since officially retiring from the company in 2005, she has remained the senior relationship adviser with the Aflac Cancer Center and serves as president of the Aflac Foundation. Well-known among the philanthropic community, Amos also currently serves on the board of the Georgia Research Alliance, formerly the Georgia Cancer Coalition, is co-chair of the advisory board of the John B. Amos Cancer Center, a member of the board of trustees of Emory University, Brookstone School, the Columbus Museum, and the Columbus Bank and Trust Company.