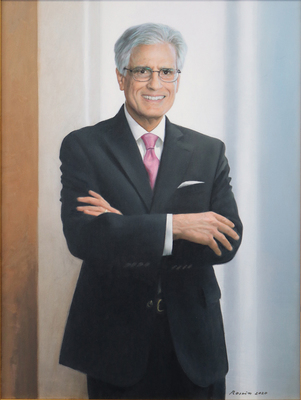 Oil on canvas portrait of Luis A. Aguilar, J.D. class of 1979 of the University of Georgia School of Law.

Luis A. Aguilar is a respected leader in corporate governance, securities laws, cybersecurity, and matters affecting corporations. He is frequently recognized for his efforts in promoting diversity and inclusion, particularly in corporations and governmental agencies.

Prior to his role as an SEC Commissioner, his career included tenures as a partner at prominent national law firms and as general counsel, and head of compliance of a global investment adviser.

Commissioner Aguilar’s tenure started only a few weeks before the market crisis that began in 2008 with the collapse of Lehman Brothers and subsequent financial turmoil. As a result, the SEC underwent a period of transformation and entered one of its most active periods impacting all aspects of the capital markets. During his tenure, Commissioner Aguilar worked to modernize the SEC’s rules to reflect the innovation and changes that had transformed the capital markets.

He has received numerous honors, awards and recognition from academia, community organizations, national publications, and other groups.